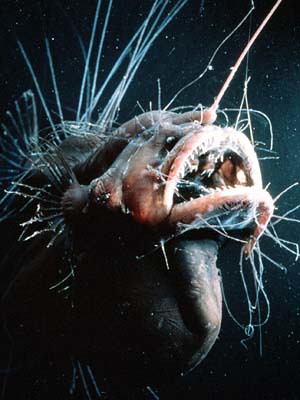 Anglerfish is a marine animal included in a group of the teleost order Lophiiformes. Deep sea anglerfish can live up to 24 years.  This bony fish is on top of the food chain as a predator. It eats smaller fishes but they can also eat larger fish that itself. Part of its diet are shrimp, crustaceans, and snails.

With more than 200 species of anglerfish, they can be found worldwide, and mostly in the depths of the Atlantic and Antarctic oceans. They look dark gray to dark brown in color. Common anglerfish size is less than a foot. The largest anglerfish can reach up to 3.3 feet in length.

Some consider it as the ugliest animal on the planet with big head and enormous crescent-shaped mouths filled with translucent, sharp teeth.

The female only uses a lure (fleshy growth from its head known as esca or illicium). With this, it can easily snatch its prey. The lure looks like a fishing pole. Some anglerfishes’ illicium produces light to attract the prey. It glows with the aid of certain sea bacteria. The bioluminescence is the result of symbiotic relationship of the bacteria and the angler fish.

Both anglerfish male and female looks the same except that the female appears to be larger.

Without pectoral fins, they have large upward-pointing mouths.  Most of them dwell in the lonely, lightless bottom of the sea (up to a mile).

Did you know that a female anglerfish can carry more than six males on her body. It has evolved into a permanent parasitic mate. How? The male will be literally be attached to the female’s body (connecting to her skin and bloodstream).

Eventually the male loses eyes and internal organs and only one that will remain is the testes. The female will use this to fertilize her eggs. During spring or early summer, a female anglerfish can lay more than a million eggs in a single spawning.

Not all anglerfishes are poisonous but some like the frogfish (another kind of angler) is deadly. It has venomous dorsal spines.

Along with the anglerfishes in the deep blue sea are: