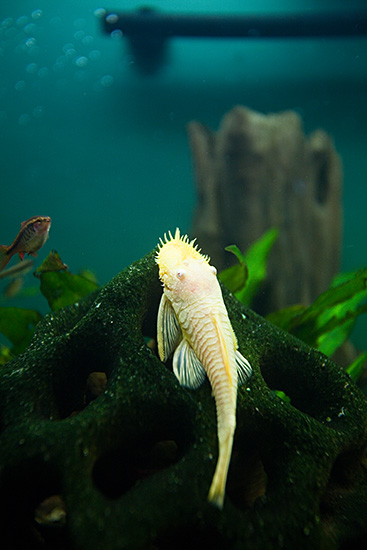 The Ancistrus cirrhosus  or bristlenose  pleco is one of the easiest freshwater pet to keep that originated in the Amazon river. It belongs to the Loricariidae family and is commonly called bushy-nose pleco by most aquarium enthusiasts. You can have it live in a 20 gallon-tank.

Tip: Always keep the water clean because they have a big appetite and prefer to eat a lot.

They love to hang out in caves. You can use coconuts or pots as their hiding spots. Having these will promote increased breeding behavior. You can grow plants in their environment but it’s not necessary. Having them is a plus to help you decrease the bio-waste (ammonia) in your aquarium.

Tip: Driftwood is also part of their diet. They slowly consume the decaying wood material and also eat the algae presence on it.

Their main diet should include algae. But, don’t worry because algae presence is common in all aquariums. Also, they accept all types of fish food. So, if there’s a lack of algae on the walls of your tank, you can feed them sinking pellets.

When the male bristlenose pleco is ready for spawning, it’ll stay in its preferred cave and wait for the female to enter. Inside the cave, the male will fertilize the eggs that were released by the female. The male can withstand two weeks without eating to protect the eggs. It will patiently wait until the babies are ready to roam around the aquarium. They aren’t territorial but during breeding season they sometimes become bad-tempered.

What is the Aquarium Species Compatible with Bristlenose Pleco?

Actually, bristlenose pleco won’t harm any peaceful aquarium fishes, especially the guppy fishes. In fact, their fins get damaged when there’s aggressive fish in their environment. So, don’t mix them with cichlids. To give you an idea, most aquarium enthusiasts put a school of neon tetra and apple snails with this kind of catfish. You may also mix angelfishes with them. Never introduce cory catfish in the tank if you don’t want your bristlenose pleco’s eggs to be eaten.

One More Thing Before You Go

Bristlenose pleco is peaceful, and suitable for a small and large community tank. They are bottom dweller so you’ll have no worry of uneaten fish food on the ground because the bristlenose plecos will consume them. Most of the aquarium lovers prefer this type of catfish than the common pleco because of its considerable size. Try owning some and you’ll have convenience when it comes to maintaining clear walls of your aquarium.

Don’f forget to see our cool videos. Thanks!